Add the Bravecto Program to your yearly parasite prevention routine! Available now!The Dog Clinic is excited to announce that we are offering a Tick and Flea Program to coincide with… read more →

Have you just moved to the Greater Hobart or Kingborough area? Or are you looking to switch veterinary practices? Join The Dog Clinic family! We are always accepting new clients… read more →

Going away for the holidays? Consider filling in The Dog Clinic’s Holiday Form attached below! Keep a paper copy of your contact & payment details in clinic, as well as… read more →

Exciting news for humans and their fur babies! As government restrictions ease, we are able to have our human clients back inside! As a business with a COVID-19 Safety Plan, we… read more →

Going away for the holidays? Consider filling in The Dog Clinic’s Holiday Form! Keep a paper copy of your contact & payment details in clinic, as well as your dog’s… read more →

What you need to know about dogs and COVID-19 Coronavirus: STAY CALM! There is NO evidence at this stage that there is any risk of contracting COVID-19 from your pet!… read more →

Rosie was originally adopted over 2 years ago, after a short and unsuccessful racing career (2 starts, but not very interested in racing). She moved from the mainland to Dunalley and lived with 2 elderly dogs, another greyhound and a kelpie. Rosie’s playful character got a bit too much for her older siblings and with much regret her owners were forced to put Rosie up for adoption again at the beginning of 2014. 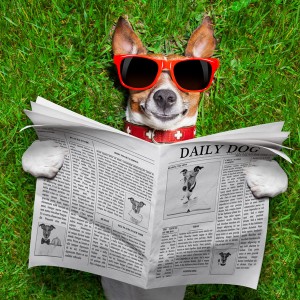